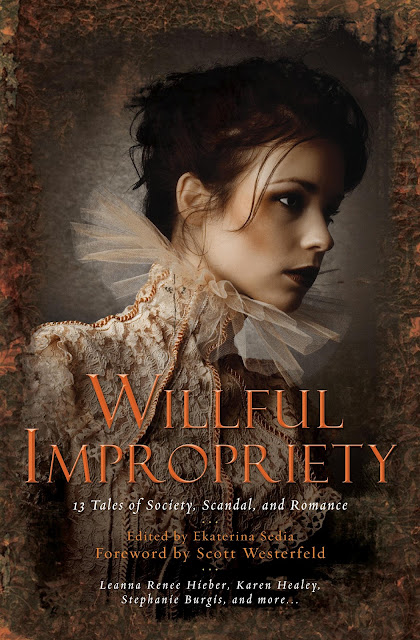 Cover reveal! Here's the Running Press US edition of the GORGEOUS cover for WILLFUL IMPROPRIETY: 13 Tales of Society, Scandal and Romance
Releasing Sept. 4th 2012 in the US (Pre-Order here from Barnes & Noble) - Release in the UK from Constable & Robinson TBA
Edited by Ekaterina Sedia
Foreword by Scott Westerfeld

Again, I'm thrilled to be in such awesome company!

AT WILL by Leanna Renee Hieber

THE UNLADYLIKE EDUCATION OF AGATHA TREMAIN by Stephanie Burgis

THE COLONEL’S DAUGHTER by Barbara Roden

THE LANGUAGE OF FLOWERS by Caroline Stevermer

THE DANCING MASTER by Genevieve Valentine

THE GARDEN OF ENGLAND by Sandra McDonald

OUTSIDE THE ABSOLUTE by Seth Cadin

STEEPED IN DEBT TO THE CHIMNEY POTS by Steve Berman

Here's the cover copy from Barnes and Noble:
"Extravagant, alluring, and unabashedly romantic, this anthology of YA historical romances includes stories from some of today’s hottest teen authors, both bestselling and on the rise. Magnificent ballrooms, expansive estates, carriages, and dark alleys set the scene for strong-willed heroines running the gamut from wallflowers to undercover spies to heiresses. Wealth, history, glamour, and romance combine in this thick and inviting paperback."

My story, "At Will", features a talented young Shakespearean actress who is brought to London to play both Shakespeare's heroines AND heroes. She's the only one who really knows her own gender as she becomes a source of gossip, fascination and scandal.

This will be a nice release to look forward to in September as we make our way to November and the release of THE TWISTED TRAGEDY OF MISS NATALIE STEWART... I hope to have a cover reveal for the next Magic Most Foul book for you soon! Blessings!
Posted by Leanna Renee Hieber at 2:00 PM

This looks AMAZING. I can't wait! And the cover is stunning. Incredibly eye catching.

OOOO! I can't wait to grab these! The cover is beautiful.

GORGEOUS, Leanna! I love everything about it!

I love it, and will feature it on my blog tomorrow as a cover reveal. If you need reviews..i volunteer!
http://www.kimbathecaffeinatedbookreviewer.blogspot.com/

I just started reading this and I must know if THE Doctor is in this story!?! I just watched a marathon of Doctor Who so I thought I was just making it up! A Mr. Smith, who has no name and she says you cant be a Doctor! Well I literally died! Fantastic writing!