On Edgar Allan Poe, and the Book that Changed Everything

I wrote the following post originally for the site Unbound Worlds. This is one of the more personal things I've written, so on this auspicious birthday of the great Edgar Allan Poe, I'd like to continue to pay tribute to his memory and re-publish this piece here, in thanks for his ongoing ministrations as my patron saint. 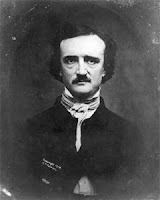 The single most influential book of sci-fi/fantasy/horror in my life, by far, was my first volume of The Collected Tales and Poems of Edgar Allan Poe. That tattered paperback went with me everywhere, it was my best friend at a lonely time, and Poe’s words spoke right to my young heart. I’d been exposed to Poe in grade school, earlier than most thanks to a progressive program. Poe became a distinct catalyst. By the time I was a pre-teen I had already begun drafting a Victorian-set Gothic novel in the vein of The Phantom of the Opera (Leroux’s classic being another influential book).

Eighteen years later, my first published novel, The Strangely Beautiful Tale of Miss Percy Parker (which now exists in print as Strangely Beautiful via Tor Books), set in an eerie, ghost-filled London in 1888, can track its existence back to that paperback book with a raven on the cover.

From first hearing “The Raven,” then diving into more poetry and the whole of his canon of stories, I was aware I was digesting true genius; an accessibility that readers young or old could grasp, his Victorian voice immediately relatable to a modern ear, his unique gift of making the grotesque beautiful, his deftly poetic turns of phrase and his powerful high-concept invention of most genre fiction.

I also felt, in reading him, like I was encountering a certain window into my own soul. The classic Shakespearean quote from Twelfth Night goes “some are born great, some achieve greatness, some have greatness thrust upon them.” In one of my novels (The Twisted Tragedy of Miss Natalie Stewart) I paid homage to this line but highlighted melancholy instead. “Some are born with darkness, some have darkness thrust upon them…”

I was born with a distinct dark side prone to ghost stories. That side came from no direct influence anyone could tell other than my own preferences; what I gravitated towards and identified with. I learned from Poe, from his art and from his own difficult life, that if that side wasn’t managed and folded in holistically into my full self, it could define me entirely, I could be lost to it, I could war with it without respite. But I also knew my dark side has always been, like Poe, the place within me inexhaustibly full of possibility and imagination, thrilling fantasy, the source of endless esoteric questions concerning the perilous precipice between life and death. My dark side has always been my muse; my creative lens, the more interesting compass determining life’s path.

Donning a Goth aesthetic when I first began shopping for my own clothes, I found that externalizing my interior narrative helped the world navigate me as I was trying to navigate the world. 20 years later, my wonderful, loving and extremely supportive parents have realized dressing in black isn’t a phase. They’ve graciously come to celebrate that my work as a Gothic novelist, artist, performer and Ghost Tour guide means I’ve made an entire career out of celebrating that razor-thin edge between beauty and horror, making friends with melancholy and telling hopeful stories from the shadows. I dance from that liminal space.

Because I dress, daily, in some level and form of Victorian mourning, when people comment on my wardrobe I always say; “if you like my clothes, you’ll like my books, I dress like I write.” The same goes for what I cut my teeth on as a young reader. Themes rife in Poe are rife in my work, as my stories are set in the 1880s, my characters often make direct reference to Poe and his tales, all of which would have preceded them. I speak on countless panels at conventions around the country about the lasting impact of Poe’s genius; my artistic north star.

I often wear (and I also make Poe-related jewelry) Poe’s image on a necklace or pin and I was once asked by someone who didn’t recognize the iconic image: “is that your boyfriend?” I laughed and just said yes. I do believe in past lives, I believe past lives are part of the reason I recognized and was drawn to 19th century stories and writers from grade school age. I doubt I am a Virginia Clemm reincarnate but I do wonder if I would have orbited in Poe’s old literary circles, or perhaps he was just as much an inspiration to me then as he is now. Perhaps the prolific, driven writer wrestling with their melancholic angels echoes through time itself.

The great tragedy of Poe’s life is not only his premature (and entirely suspicious) death, but the constant spectre of loss that haunted him forever; abandoned early in his life, as an adult, his great love Virginia (a healthy, mutual, consensual relationship that by all records was a devoted one on both sides) dying of tuberculosis in the bloom of youth was a blow from which he never recovered, the sincere lack of public appreciation of his groundbreaking, gorgeous work, and the constant financial strife chasing down every penny publishers owed him, all of which drove him to drink. He was not, however, as crazed or as addicted as history has made him out to be, that’s all trumped up allegations from Rufus Griswold, a literary nemesis in life that published a damning and sensationalized biography of Poe after his death. We tour guides try to set the record straight and return Poe’s memory to a more moderate tale of a difficult life of an underappreciated genius.

I pay homage to Poe, and that well-worn paperback collection, every day. I walk the streets he walked while living in New York, I keep his authorial voice in my ear, and from the moment I knew art could be a healing salve and spiritual calling, he’s never been far from me; my melancholic prince, my patron saint.


Happy Birthday, Mr. Poe. I hope your spirit can take comfort now knowing how loved you are in our time.
-- Leanna Renee Hieber

If you like these thoughts, you'll like my books! Especially The Spectral City series with Kensington Books! Cheers and Happy Haunting! 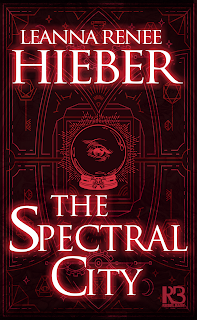 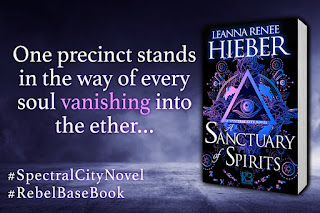 Posted by Leanna Renee Hieber at 10:00 AM